The Alexander Technique has been supporting music students at the RCM since the 1950s. In the last 25 years the technique has been inserted and embedded in the UG and PG degrees. There are mandatory courses in the first two years of the BMus course, then students can choose to pursue Alexander as an academic option in the third and fourth years of their UG degree. Masters students can choose the academic Alexander option to develop their understanding and use of the ideas in their final years of musical training. Non-degree lessons are available to RCM students who realise the value of understanding that their ‘use’ is the way they sing or play their instrument. All Alexander lessons support students in their quest to implement advice from their first study professors, conductors and coaches. Apart from the obvious catalytic influence on the learning process of all music students who study the Alexander Technique; many students with various discomforts or health problems have been put back on the right track through their Alexander lessons. 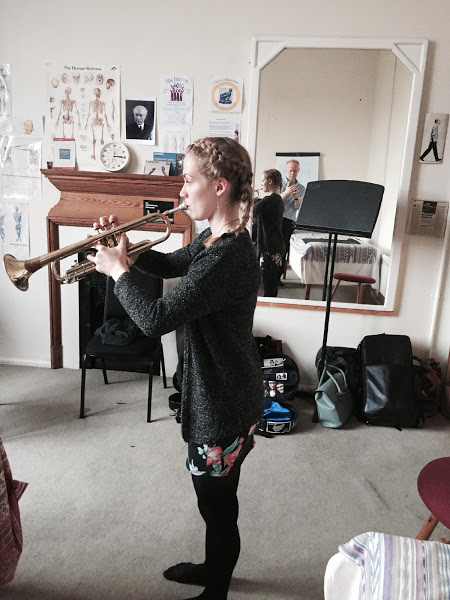 For many years I believed that pain after practising was a normal consequence of good work. By taking Alexander lessons I learned to be more aware of misuse. As a result instead of playing in a way that develops repetitive practice with bad habits. I decided to make the choice to get rid of all the unnecessary stiffness which does not help to solve the real problems. In this way I made it clear to myself that without ‘inhibition’ I will just go on repeating my mistakes. (Claire Thirion, Cello)

This inhibition can be applied when performing a piece of music. Instead of playing in a way that has developed through repetitive practice, we can make the choice to feel and listen to the space between the notes and obtain a freedom to respond in a way that aids the flow of phrases instead of impeding them. We can choose to be aware of certain technical aspects that are necessary, whilst all the time considering the ultimate goal, of phrasing and shaping the structure of the entire piece. (Kate Robinson, Violin)

I now realize you should never try to change or enhance breathing directly. You inhibit the extra effort or gestures you are making, like pulling your head back to open your mouth. In its simplest form, breathing is not something you do, instead it is something that happens to you when you don’t get in the way. That is what’s left in place when you inhibit the unnecessary effort. (Suzzanah Watson, Flute)

I have found that by integrating the directing of my head upwards and my shoulders outwards, as I am consciously working my way through a musical problem zone, I am far more likely to stay in control. (Cassie Yukawa, Piano)

I found a couple of books in the Green Room and lay in semi-supine for 15 minutes, lengthening and widening my back and feeling my knees rising, I have to say the conductor looked extremely surprised when he walked in!! On a serious note, it changed the way I perform forever- I was completely calm and in control, and I was able to focus completely on the music. (Jeannine Thorpe, Violin) 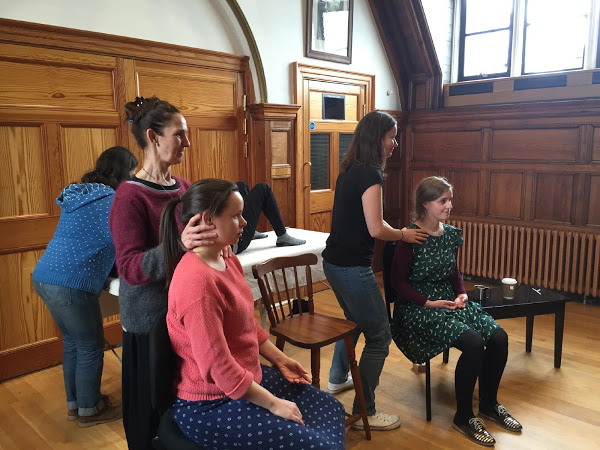 Elana Eisen working with a challenging young piano student, wrote;
While sitting I worked at opening my back and took care not to fold my arms or legs. I wanted John to feel I was receptive and sympathetic rather than closed off from him. While working at my own use, I aimed to alter John’s by the power of imitation.’ I found that John responded to my more open and relaxed way of being very quickly, by mirroring my position and matching the speed and volume of my speech. As my improved use enabled me to be calmer and more positive, John began to develop his potential for calmer emotions.

One of the things I am learning about acting in opera is that it is more powerful to let myself be a character than to try to be a character. I am learning that in order to do this, a great starting point is finding as neutral a state as possible, where my physical and emotional bodies are as quiet and effort-free as I dare let them be. Working with AT helps me notice finer physical, emotional and mental tension or gripping that I can begin to let go of. (Chris Ainslie, Singer) 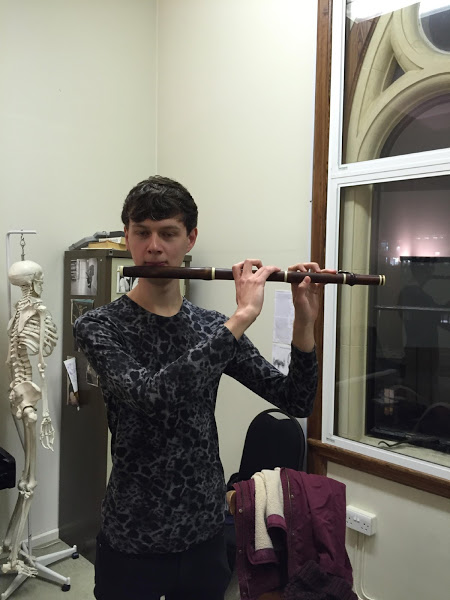 There was an experiment in the 1950s, giving Alexander lessons to the singing students at the RCM. The results were very impressive and a scientific comparison was made with a control group from the Central School of Speech (This is written up in Barlow’s collection of writings about the Technique, ‘More Talk if Alexander’).

In each case there has been a marked physical improvement, which was usually reflected vocally and dramatically. It was a revelation to discover that tricks of behaviour could be eliminated in a comparatively short space of time once the student learned to control his tensional balance from the head-neck region. In all cases students, since re-education, are easier to teach and can take and carry out stage directions with greater ease.

The students seem to become aware of themselves in a new way. Each student reacted in a different characteristic way. For example, those who had been over-anxious to please authority discovered that they could be themselves with impunity, ceasing to be such model students, but becoming better performers. One student, a girl hampered by angular stereotyped movements, and a curiously ‘spinsterish’ quality of personality, has acquired considerable warmth and gracefulness. Another, with originally a very mediocre ‘drawing-room’ voice, is now considered by her original teachers and critics to have developed the qualities of voice and personality that go to make a really great singer.

The time it takes to get result varies greatly between one student and another. The utilization of the approach depends largely on the student himself.

Eight of the fifty re-educated students entered last year for a singing prize which is competed for by women singers every four years. It is open to all amateur and professional singers under thirty years of age in the British Isles, and is considered the highest achievement possible for students. The total entry was over one hundred. Of the eight students who entered six reached the semi-final, in which there were fifteen competitors. This is quite out of proportion to what one might expect.

In our opinion, this approach is the best means we have yet encountered for solving the artist’s problem of communication and should form the basis of his training.

That inspirational final conclusion was followed up with the introduction of Alexander lessons at the RCM, not as the basis of the education but at least it was made available to music students at a major international conservatory.