Stress? Take it lying down 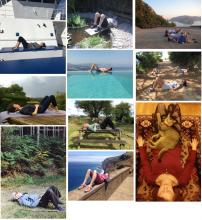 Stress? Take it lying down

Teachers of the Alexander Technique – a practice which helps you to change long-standing habits that cause unnecessary tension and is acclaimed by celebrities across the globe – are urging you to take stress lying down this October.

The Society of Teachers of the Alexander Technique (STAT) is leading National Lie Down Day in an attempt to equip us with a century old technique which helps to manage stress.

During Alexander Technique Week (8 to 14 October) teachers worldwide will be encouraging everyone to lie down every day for ten minutes in the ‘semi-supine position’.

The position, also known as ‘active rest’ is the best way to restore and reconnect the body and mind; a little like the reset button on a computer. As well as realigning the spine, it stops you feeling overwhelmed, allowing you to focus on yourself and providing vital time out to quieten the mind and process emotions.

Acknowledging and taking control of the emotions associated with stress, whether they are anger, fear or helplessness is key to dealing with them. It is when they begin to control us that they become dangerous and, at worst, can lead to severe physical and mental health problems.

Sue Laurie, an Alexander teacher who has taught the technique to Dame Judi Dench, Sir Ian McKellen and actors at the RSC and National Theatre says: “Lying in the semi-supine position is the best way to stop and take charge of your mind. And although you’re not actually ‘doing’ anything, this can be harder than it sounds.

“We often have the knowledge of what we should do to take care of ourselves but when you’re stressed or fraught, the thought of pausing or slowing down, let alone be seen to just lie down on the floor, isn’t instinctive!

“We want to change that and show people how taking just ten minutes out of their day can make a huge difference. The impact that the Technique has on body and mind is immediately palpable.”

As Alexander Technique Week gets underway, STAT is asking people to share pictures of themselves lying in semi-supine wherever they can using the hashtags #LieDownDay, #SemiSupine and #AlexanderTechnique.

Sue continues: “This could be at home, in a quiet space at work or even in the park at lunch time. I once had a pupil who felt she needed to lie down and go through some Alexander whilst shopping in Marks & Spencer – so she did!

“We need to make it more acceptable to take time for ourselves and be responsible for our own wellbeing. Lying in semi-supine should be as habitual as cleaning your teeth and it’s every bit as preventative in terms of our health.”

Events across the UK during ATW

The Alexander Technique makes me feel more comfortable, poised and peaceful. I started lessons years ago and have kept them up because I love the body awareness they teach. The Technique helps me to let go of tension and feel better, not just during lessons, but always.